Nothing Is “Tired Of Tomorrow” — What About You? 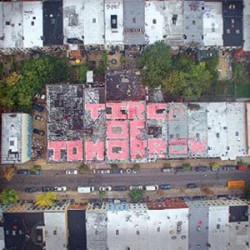 Philadelphia-bred Alternative band Nothing is back with their latest record, and contrary to the album’s title, Tired Of Tomorrow, we’re looking forward to tomorrow — May 13th, specifically — because the music is that good.

Recorded over the course of a year with producer Will Yip, this follow-up album to Guilty of Everything revolves around a balance of opposites and contradictions, and touches on topics such as love, death, denial — all tied together with catchy choruses, complex lyrics and a groove that will leave you wanting more.

In preparation for the record, Nothing released a social media campaign around things they are tired of. Ranging from “tired of pretending” to “tired of running” (who isn’t tired of cardio…), they also give their fans a chance to contribute via a meme generator: www.tiredoftomorrow.com. What’s more, three lucky fans whose memes generate the most likes will win some sweet Nothing prize packs.

Now, get a taste of the music with the recently released video for “Eaten By Worms” via Rolling Stone, who described the video as a “dark, otherworldly affair… which explores the realm between life and death, reality and dream.” The video certainly gives fans a look into what to expect from the full album.

I hopefully leave you with the urge to stay on the lookout for Tired of Tomorrow, out next Friday on Relapse Records. Catch them on tour, too, if you can — it’s sure to be quite the experience!