Out Today by The Orchard: Born Ruffians, Miracle & More 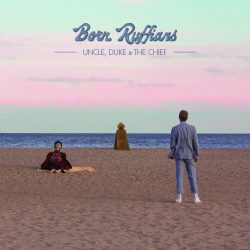 Every artist has their own creative approach shaped by individual experiences. Some artists use music to reach self-realization while others stumble upon it during the creative process. That is often why bands and artists change direction from album to album; life never stops creating exciting challenges that evoke ever-changing ideas. Varying from rock’n roll to synth-pop, the albums we are hosting today vary but they all carry traces of personal and creative discovery.

After three years of silence, Born Ruffians returns stronger than ever for their fifth album Uncle, Duke & the Chief. With their original drummer Steve Hamelin joining the band once again, frontman Lalonde admits that they pushed their boundaries to develop their sound further. Born Ruffians puts the emphasis on rhythm by echoed handclaps, explosive drumbeats and tambourine rattles, drawing influence from legends of old school rock’n roll like Buddy Holly, The Everly Brothers and the Beatles on their latest Paper Bag Records release. With the trilogy of videos produced by Leah Fay Goldstein and Peter Dreimanis, this Canadian band not only serves your ears, but eyes as well. Check out the last of the trilogy with, “Miss You” below, and get the full album here.

Dark synth-pop duo Miracle is back! Horror film music composer and synthesizer wizard Steve Moore and multi-instrumentalist Daniel O’Sullivan join forces for their third album. The Strife Of Love In A Dream via Relapse Records captures the melancholy in the 80’s dark-wave sound and blends it with futuristic synth-driven soundscapes and booming beats. Recorded over the course of 4 years, Miracle transports you back in time to disco dance floors with a gothic twist. Get a taste of the album below and check out the full album here.

“To me this record is about a new chapter in my life” reveals Endless Heights vocalist Joel Martorana. The band explains the creation of their third album Vicious Pleasure holding onto the feelings of “some kind of pleasure, convenience, or control.” A heartwarming and highly expressive album, Vicious Pleasure, released by newly announced partner Cooking Vinyl Australia, will surely move crowds with the expression of “pure catharsis” from Endless Heights. Check their music video “Come A Little Closer” below and access the full album out now.