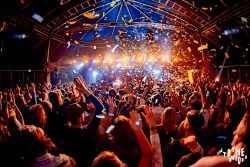 Every year The Orchard heads to the Netherlands for the annual Amsterdam Dance Event, which welcomes thousands of dance fans and industry professionals from all over the world. To get a sense of the size and scope of the week-long celebration of dance music, during its 23rd year, ADE brought in 400,000 visitors from more than 100 countries. Held on October 16 – October 21, there were 1,000 individual, official events across 200 locations, more than 2,500 artists performed, and 600 speakers shared insight through keynotes, panels, and workshops. Quite impressive if we do say so ourselves.

Some of our favorite parties of the week included the Djoon Experience, Lumberjacks in Hell, Lou Lou Records, Motor City Drum Ensemble, Dub FX, and the stunning performance by techno-marching band MEUTE. The Djoon Experience celebrated a night inspired by African music from Afrobeat to disco, house, afro house, and more with music from Afshin, Boddhi Satva, John Agesilas, and Manoo. The Lumberjacks in Hell event was headlined by the legendary Danny Krivit, having made his mark in New York City DJ’ing for some of the city’s major clubs over the past 45 years. The party was topped off with music from the local dance scene. Liquid State, a hub for electronic and dance music from the Asia Region, hosted a showcase featuring performances by Alan Walker, The Partysquad, Seungri, CORSAK.

And just as the parties wound down, the panel sessions brought to light some fascinating conversations, one of many including China Bound which unpacked the story of Robin Leebruggen (Label Manager and Head of A&R, Liquid State), moderated by DJ/producer Anish Sood. After his move to China a few years ago, Robin worked as a DJ manager at Mad Panda, shortly thereafter becoming a key member of Liquid State, which would become the country’s most sought-after label. The session dissected the challenges, opportunities, and the strategy behind doing business in Asia as a European.

The entire week gave a huge nod to Amsterdam’s rich dance history, celebrating 30 years of dance music in the city of Amsterdam alone. Special programming on South Korea and Asian Dance Music were prevalent throughout the week and gets us really excited to see what 2019 will bring to dance music communities all over the world. Congrats to an incredible 23rd year, ADE!