Digging Through The Archives: Ghetto Brothers 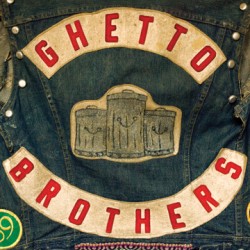 Welcome to Digging Through The Archives, a new recurring Daily Rind feature from the Creative Services department that will explore cool vintage obscurities, under-the-radar sleepers, catalog albums in the news, and more.

My first entry was inspired by both National Puerto Rican Day and a recent viewing of the fantastic documentary Rubble Kings. The film chronicles the explosion of gangs in the Bronx in the late ’60s and early ’70s, and how the 1971 murder of Cornell “Black Benjie” Benjamin, a widely respected peace counselor from The Ghetto Brothers, a gang more interested in community activism than street violence, ultimately led to a borough-wide gang truce. Central to this story are Nuyoricans Benjy “Yellow Benjy” Melendez and his brothers Robert and Victor who, along with several other musicians, also performed music as the Ghetto Brothers.

As Benjy Melendez, a founding member and key leader of the gang, was attempting to broker peace, he would invite rival gang members onto Ghetto Brothers turf for tension-diffusing block parties. The Ghetto Brothers, who played “an infectious mix of pop, soul and Latin rock” [New York Times] would provide the entertainment. Though the peace didn’t last, the goodwill engendered by these parties would prove to be a pivotal influence on Afrika Bambaataa (himself a former gang member), Kool Herc, and other hip-hop pioneers.

The band ultimately recorded one album, 1972’s Power-Fuerza, an eight-song collection recorded over the course of one afternoon that disappeared from circulation relatively quickly but would go on to acquire near mythical status among record heads, even after it was reissued by Brooklyn label Truth & Soul in 2012. (At the time of this writing, an original pressing is listed on Discogs for $1,300). This, coupled with the group’s story, which The Atlantic described as “one of the best in all of rock and roll,” certainly creates some high expectations. Certainly, Power-Fuerza is pretty irresistible.

Combining dance-friendly soul music, Beatles-inspired pop and Latin rock, with lyrics that speak to serious topics like the Ghetto Brothers’ mission of unity and community [“Ghetto Brothers Power”] and Puerto Rican nationalism [“Viva La Puerto Rico Libre”], as well as more common concerns like love, heartbreak and betrayal, the album is the sound of a band trying to create pure joy for a community that was in dire need of some.