Out Today by The Orchard: Anvil, The XCERTS & More 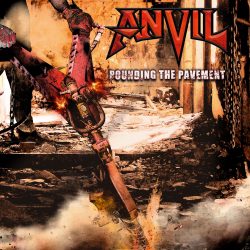 Close out of your emails, grab your headphones and power down because it is finally Friday: the best day of the week. It’s the last day of work with a full weekend to look forward to and of course, it’s packed with new music and films. This week at The Orchard, we’ve got a classic metal band kicking into high-gear, a pop-rock UK group that will have your heart racing and a wildly exciting film full of love and mystery, all Out Today.

You might have heard us mention a not-so-little German label called SPV and their legendary in-house imprint, Steamhammer. From our new label partner comes a huge release by metal favorite, Anvil, titled Pounding The Pavement. Known for 1980’s hits like “Metal on Metal” and “Slip Kid,” the group resurfaced in part thanks to the 2008 documentary Anvil! The Story of Anvil. The tale of two best friends continuing to pursue the rock and roll dream captures the band’s personality and quirky demeanor. Grow out your hair and get ready to head bang along to “Ego” below and buy or stream Pounding The Pavement now!

A little bit of fun, a contagious sound, and catchy lyrics — What more can you ask for? From Raygun Records, The XCERTS new record is full of uplifting rock jams that will have you dancing away your sorrows. Each single from the LP, titled Hold on to Your Heart, is infectious, earning joyous feedback from fans and new listeners alike. The optimistic feel was inspired in part by influences like Tom Petty and Bruce Springsteen. The hopeful exuberance that permeates the album is pleasantly youthful, transporting you to times of new beginnings, first loves and carefree attitudes. I dare you not to get “Feels Like Falling In Love” stuck in your head as you listen along. Check out Hold on to Your Heart, available now.

Joachim Trier‘s film, Thelma, is now available on iTunes and VOD. The film follows a Norwegian student studying in Oslo who is overcome with new experiences. Chillingly eerie, the lead character struggles to understand her own romantic feelings for her friend. Her confusion and suppressed emotions consumer her, exacerbating seizures that coincide with heightened psychokinetic powers. The Norwegian film is both creepy and beautiful. Watch the trailer below and find the full film here.