SONI withanEYE Is A Rebel! 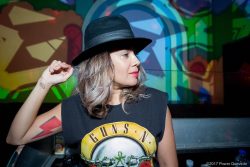 SONI has a healthy resume in the music industry. She worked at H.O.L.A. (House Of Latin Artists) Recordings under critically acclaimed songwriter, DJ and remixer John “Jellybean” Benitez who is a master of the dance genre. She has worked and appeared on projects with a number of acts across the musical spectrum like The Beatnuts, Timbaland and Little Louie Vega as well as on numerous mixtapes and studio albums from the treasure chest of DJ Tony Touch. She has also toured extensively around the globe particularly in Europe. Additionally, SONI is the host of Toca Tuesdays every Tuesday Night at Club Cielo in the West Village. The show, broadcasted via live stream on Breal.tv, was created by B-Real who is the frontman for iconic hip-hop group Cypress Hill. If you want to get an idea of the story behind SONI withanEYE take a look below:

Now on to SONI’s project. “Rebel” is a montage of styles that SONI calls “hiprock,” which is a combination of hip-hop, rock, new wave, funk, latin and soul. Right from the get-go, SONI takes you on a journey through her neighborhood with Queensbridge comrades Mobb Deep adding verses to a dope track produced by Beantown native DJ Statik Selektah. The lead single “Rebel” is a ladies first anthem with a Tony Touch soundscape where SONI articulates her vision on her own terms. The accompanying music video features cameos from Natalie, one half of Nina Sky and model, artist, and acclaimed tour dancer Gloria “Glo” Velez. Chef Raekwon of the Wu-Tang Clan contributes a sterling verse to SONI’s vocals on “Get It Together” produced by Dzilla. The “Get It Together” video features graffiti art, violins, and an interplay between SONI and unheralded actor Gano Grills. On “Mister Feel Good,” another Tony Touch production, SONI shines on the bubbling track, accompanied by blazing horns and other instrumentation.

Entering the second half of the album, SONI withanEYE takes to task those that try to cramp her style on the uptempo track “Silly Girl.” Here, SONI is accompanied by drums courtesy of the one and only Questlove of legendary group The Roots. One of the most powerful tracks on this record is SONI’s amazing cover of the La Lupe song “Se Acabo.” For those that do not know, La Lupe was a Cuban singer specializing in boleros, guarachas (Cuban popular music) and Latin Soul, and she was one of the most prolific artists in those genres during the 60’s. To close out this project, fellow H.O.L.A. alumnus and Def Squad member Hurricane G hops on the track “That Man“ to compliment SONI’s lyrics with Tony Touch behind the controls once again. The song describes men that do not treat their women well and encourages women to break free from unhealthy relationships.

Rebel by SONI withanEYE is currently available for download and streaming on your preferred service. You are getting a gem of eclectic music.