Out Today by The Orchard: Antibalas, Mykur & More 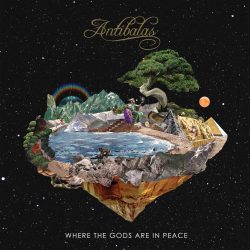 Put down your pumpkin spice latte for a minute and lend an ear. This week is jam packed with music’s finest to start your weekend off right. We’ve got something from every corner of the globe from southern cowboys to the dark corners of Scandinavia to a Brooklyn-based afrobeat group that could very well be from another world completely.

The horn heavy 12 piece group known as Antibalas has released their newest album Where The Gods Are In Peace from Daptone Records. The album is made up of only three songs (or technically five?) but still provides over 30 minutes of music with tracks ranging from four minutes to almost 11 minutes in length. Forget about the road less traveled, where Antibalas goes, there are no roads. This unique afrobeat, funk band makes music they love and breaks all the rules to create art with their sounds. Listen to the abbreviated version of “Gold Rush” below and check out the full length here.

Country duo Big & Rich are back with Did It for the Party via Big & Rich Records. Big Kenny and John Rich, best known for their hit “Save a Horse (Ride a Cowboy),” dropped their latest single “California” this past spring. The album is full of party anthems including titles such as, “Congratulations (You’re A Rockstar)” with a sensitive twist on songs like “Turns Me On.” Take a listen below and get ready to party!

On an entirely different note, Relapse Records metal goddess Myrkur releases Mareridt. If you haven’t heard about Myrkur yet, do some research because she may be one of the most mysterious and dark artists ever. The Scandinavian composer has a deep connection with music and connects with her routes using violin, mandola, folk drums as well as Kulning, an ancient Scandinavian instrument, and nyckelharpa, a Swedish key harp. She performed a folk song on the nyckelharpa which was shared on Facebook last spring and has earned over 10 MILLION views to date. Listen to her recent single “Ulvinde” from Mareridt and check out her full album now.