Out Today by The Orchard: Lucero, Adult Karate & More 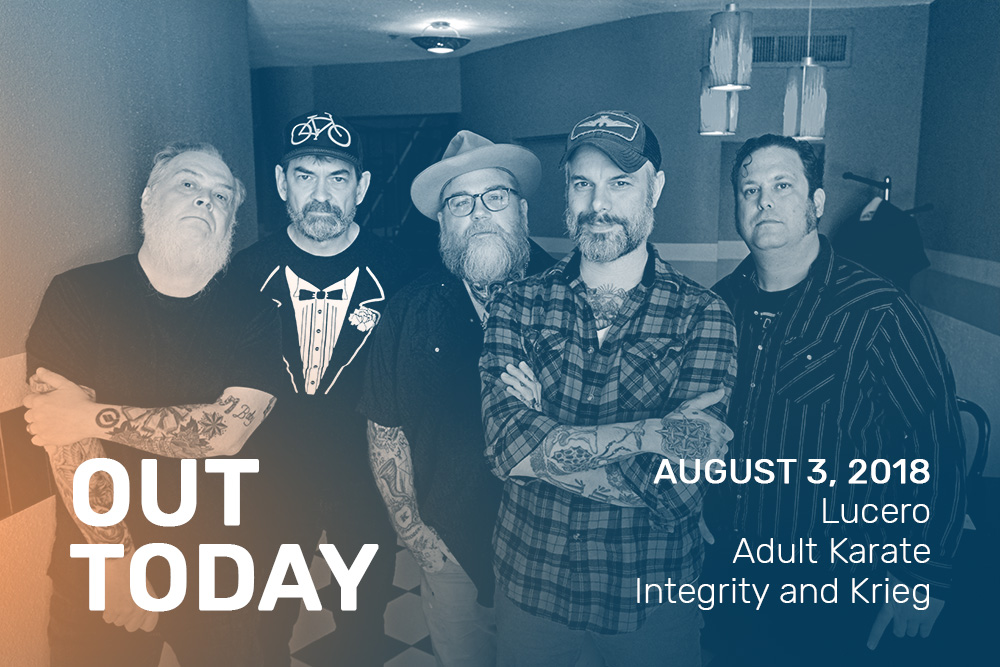 Happy Friday music fans! Grab your umbrellas and fans because this Friday is a murky scorcher. You’ll hear rock, electronic, and some very intense metal comparable to the current end-of-summer haze. First, Lucero delivers a stunning ten track album co-produced by Grammy winner Matt Ross-Spang. Next, Adult Karate introduces a diverse, vintage new wave sound. Finally, metal lovers rejoice with an album united in darkness from Integrity and Krieg. So turn up the volume, experience new music, and get your weekend started with these records, all Out Today.

Legendary band Lucero drops their ninth album, Among the Ghosts via Liberty & Lament/Thirty Tigers. Acoustic guitar, bass, and thrashing drums appear in this album varying from the horns and piano that characterized the last three records. Frontman Ben Nichols tells Rolling Stone that overall, there is a darker tone and mood to this album than previous. Nichols says, “because now, with a family, as happy as I am now, I’ve got something to lose. There’s a new kind of fear I’ve never felt before.” The band still has their Memphis Americana-styled roots but, their lyrics tell a more universal story. Lucero believes this album truly captures their sound for their record best. Celebrating their 20th year playing together, the album features rough vocals while also keeping inspiring and tender lyrics. With themes of family and hope, listen to Among the Ghosts and travel down memory lane with the band, below.

Producer and singer-songwriter K.C. Maloney, also known as Adult Karate, releases his first full-length album Del Mar via Plug Research Records. This album did not come naturally. In fact, K.C. said it was a long and stressful process. In this very personal record, he opens up about his woeful past. With no two songs alike, you’ll hear various electronic elements ranging from pop, indie, and bleak underground dance music. His title track, which features good friend Adaline, addresses his battles with depression and suicide. He opened up to Billboard about his music and told them that when writing, he gravitates towards a darker side. To contrast the gloomy lyrics of the title track “Del Mar,” the tone is actually upbeat. Adult Karate only has a few shows scheduled at the moment but don’t worry, he’s not shooting down the idea of a bigger tour. He is staying busy and continues creating. Listen to the title track “Del Mar” below and check out the full range of tunes here.

Speaking of dark, Integrity and Krieg have teamed up for a split album aptly named, Split, out now via Relapse Records. If you’re into the dark, heavy and loud, this album is for you. If not…just try not to get too scared. The bands met while playing at a festival and instantly meshed. Neill Imperial (Krieg) and frontman Dwid Hellion (Integrity) spoke with Revolver about the project and how they use music to combat their inner darkness. Hellion goes on in the article to describe Integrity’s method of leaning into their violent sound, stating, “For me, I make music that I would like to listen to. I create images that I think express what the music is saying, and are appealing to my aesthetic, to my artistic taste.” Get to know the artistic stylings of Integrity and Krieg in Split out now, and get a taste of their thrashing alternative metal-core sound below with “Scorched Earth.”

Thanks for reading along and be sure to check back next Friday for some more awesome releases all Out Today by The Orchard.