Out Today by The Orchard: Sasheer Zamata, Donald Cried & More 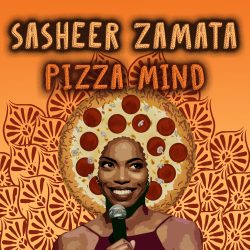 Happy June everyone! We’ve officially made it to the first month of summer, so it’s time to hang on for dear life to the last few days of great weather and let loose this weekend. Lucky for you, we’ve got the latest on this week’s releases including the perfect mix of comedy, music and film to kick off the summer fun.

If you’re a comedy fan like me, you wish SNL could run all year. If you’re also like me and are already having withdrawals, get your comedy fix with cast member Sasheer Zamata’s very first special: Pizza Mind, brought to you by Comedy Dynamics. Zamata is refreshingly unconventional, breaking the traditional mold of a standup special by incorporating animated shorts, sketches, and even a choreographed musical number proving herself to be much more than a member of an ensemble. Furthermore, she is equally engaging discussing everything from her experiences with racism to her experiences with psychedelics. The hilarious special pulls out all the stops showing nothing is off limits to Zamata. Check out a clip below and stream the album here.

From Mello Music Group, Gensu Dean & Wise Intelligent release their newest album, Game of Death. From 90’s group Poor Righteous Teachers, Wise Intelligent is back for the first time in two decades to team up with Gensu Dean on this classic release. Often called hip hop’s best kept secret, Gensu combines the old and the new using only analog gear, a laptop and his massive vinyl collection to create a thought-provoking album with a gritty, old-school sound. You can stream the album here, and get a taste below from the title track’s video.

If you’re looking for a roller coaster ride of emotions featuring some incredible acting, look no further than our very own critically acclaimed Donald Cried, now available on demand!  The impressive Kris Avedisian writes, directs AND stars in the empathetically awkward film along with Jesse Wakeman. Watch the unexpected hometown reunion of formal childhood buds Peter (Wakeman), a big shot banker and Donald (Avidesian), a… bit of a character.  A wild ride into their past full of awkward tension and bizarre hijinks, this dark, hilarious and brutally honest comedy ultimately will make you laugh and then make you think. Watch the trailer below before getting the film here.