Out Today by The Orchard: The Walking Dead, The Frightnrs & More 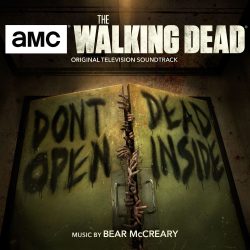 Taking a break this month may seem tough – summer serenity feels like a lifetime ago as the hours of sunlight grow shorter. Keep pushing through with the colors of fall, holidays, upcoming winter festivities and three incredible new releases. A pop voice with the melodies of heartbreak, beats having you at the edge of your seat from one the most popular TV shows, and a reggae sound destined for tranquility, are all Out Today.

Time for another season of the most riveting post-apocalyptic world, spewing with zombies and our favorite actors, coming together to destroy them. In case you are unsure of which show we’re talking about – The Walking Dead premieres it’s eighth season on AMC this Sunday, the 22nd. With a new season comes a new soundtrack by Bear McCreary. Prepare for a scare with fresh beats backdropping Daryl riding that infamous motorcycle, Michonne swinging her signature weapon, and most notably, Rick devising his many plans amidst dramatic beats to heighten your nerves. Get a taste of The Walking Dead (Original Television Soundtrack) from Lakeshore Records with the official trailer below.

What’s more zen than an album full of dub tracks? The Frightnrs unique sound was created when the late frontman, Dan Klein, ditched punk rock and found a passion for Jamaican beats. His unfortunate passing in 2016 due to A.L.S. did not stop the group. Instead, they pledged to continue, ultimately completing the dreams of their former band member. More To Say Versions is The Frightnrs second release via Daptone Records, and completely reconstructs their first album Nothing More To Say for an entirely new feel. The new ‘Versions’ are filled with all that’s gloomy and bittersweet and then smoothed with Klein’s versatile tones. Find yourself lost in the story and rich mixture of funk and reggae with “Lookin (Versions).”

It’s easy to get lost in the many vocals and sounds behind pop music, and it’s always a sigh of relief once you find a fresh voice that sticks out above the rest. Demar approaches pop with mid to low tempo tracks, topped with production that places the listener into her exact state of emotions. Rebels is Demar’s debut release from Still Water Recordings. The lyrics of relationship withdrawals and struggles on living a happy life is one that’s universally relatable. Prepare to sit deep in your feels while listening to Rebels‘ lead track, “Fire.”