Out Today by The Orchard: Umphrey’s McGee, Dina & More 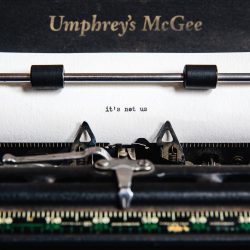 We’re all back at the grind this week with ambitious New Year’s resolutions (hopefully) still afloat. You might plan to get in shape, earn that promotion, or cut back on a bad habit, but let’s keep it simple and just try new things! Treat yourself and expand your mind by following our weekly releases with the cream of the independent crop. This week we’ve got a little bit of rock and roll, an award-winning documentary and a heart wrenching poetic lyricist, all Out Today.

Umphrey’s McGee is back. Their new album It’s Not Us, via Nothing Too Fancy, is a refreshing taste of something new peppered with a classic rock vibe. Every song is drastically different from the next, with remnants of ’80s nostalgia on “Looks” to grungy party rock jams like “The Silent Type.”  Their 11th studio album, the group recently hit the 20 year mark and continues to refine their sound and look towards the future. After two decades they’ve continued making great music that draws with an addictive fervor. Umphrey’s is currently touring across the US with three back to back dates in NYC next week. Normally, I’d say something like “get a taste below” but “The Silent Type” is just one piece of a wide variety of stylings this albums offers. Check out the full album, It’s Not Us, now!

Dina and Scott are not your average couple. Dina has found love after tragedy and Scott is experiencing many milestones for the first time. The documentary follows the pair as they navigate new ground, from moving houses to getting married. The story has earned the IDA Documentary Awards top prize for Best Feature, Sundance’s Grand Jury Prize and is highly-ranked amongst popular critics with a whopping 98% on Rotten Tomatoes. Watch the trailer below and see the full film here.

Nathan Hussey has a packed year ahead with his first solo release, Hitchens available now from Equal Vision Records. This is Nathan is also working to release and album with the group All Get Out, made up of Andy Hull and Robert McDowell (Manchester Orchestra). Hitchens is a poetic insightful album full of Hussey’s personal thought’s that are both powerful and relatable. Each song drips in sincerity and emotion, whisking listeners into a dreamy state of reflection. Incredibly talented, the album captures Hussey’s writing abilities and delicate vocals. Take a listen to a live rendition of “Stateside,” below and get the full album now.