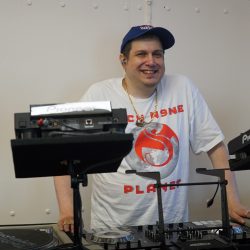 The type of claims I handle usually relate to sound recordings (masters), but I also receive a handful regarding compositions (publishing), artwork, name/likeness usage and trademarks. I actively participate in litigations and settlements where I do research and provide analysis to assist our talented attorneys.

Finally, I write a quarterly blog post for The Daily Rind where I feature a new release. Using my expertise in the hip-hop genre, I aim to assist our highly decorated Content Acquisition team by highlighting artists from a current or new label and breaking down their releases from a product perspective.

We got an inside scoop that you have a strong interest (some would say an obsession) with 80s and 90s hip-hop. Where does that passion come from?

Hip-hop is in my soul and is like a battery pack that keeps me going 24-7, 365. The first hip-hop record that I heard was “Call Me D-Nice” by D-Nice of Boogie Down Productions around 1989/1990. From there, I embarked on a long journey studying hip-hop history and culture starting from the past, which was extensive, and finally catching up to everybody else in the present.

If you were a Seinfeld character, which would you be: I would probably be a mix of Jerry and George.
Favorite record of 2018 thus far: Jean Grae & Quelle Chris “Everything’s Fine” via Mello Music Group
Jay-Z or Nas: If we are talking about the battle, I would say Nas.
Random fact: The first concert that I went to was not a hip-hop show. It was a show in NYC starring Eric Burdon and The Animals. Also, the first music as a young child that I got into was 50’s/60’s Rock N Roll listening to CBS FM 101.1 with my mom so I know all about Dion & The Belmonts!