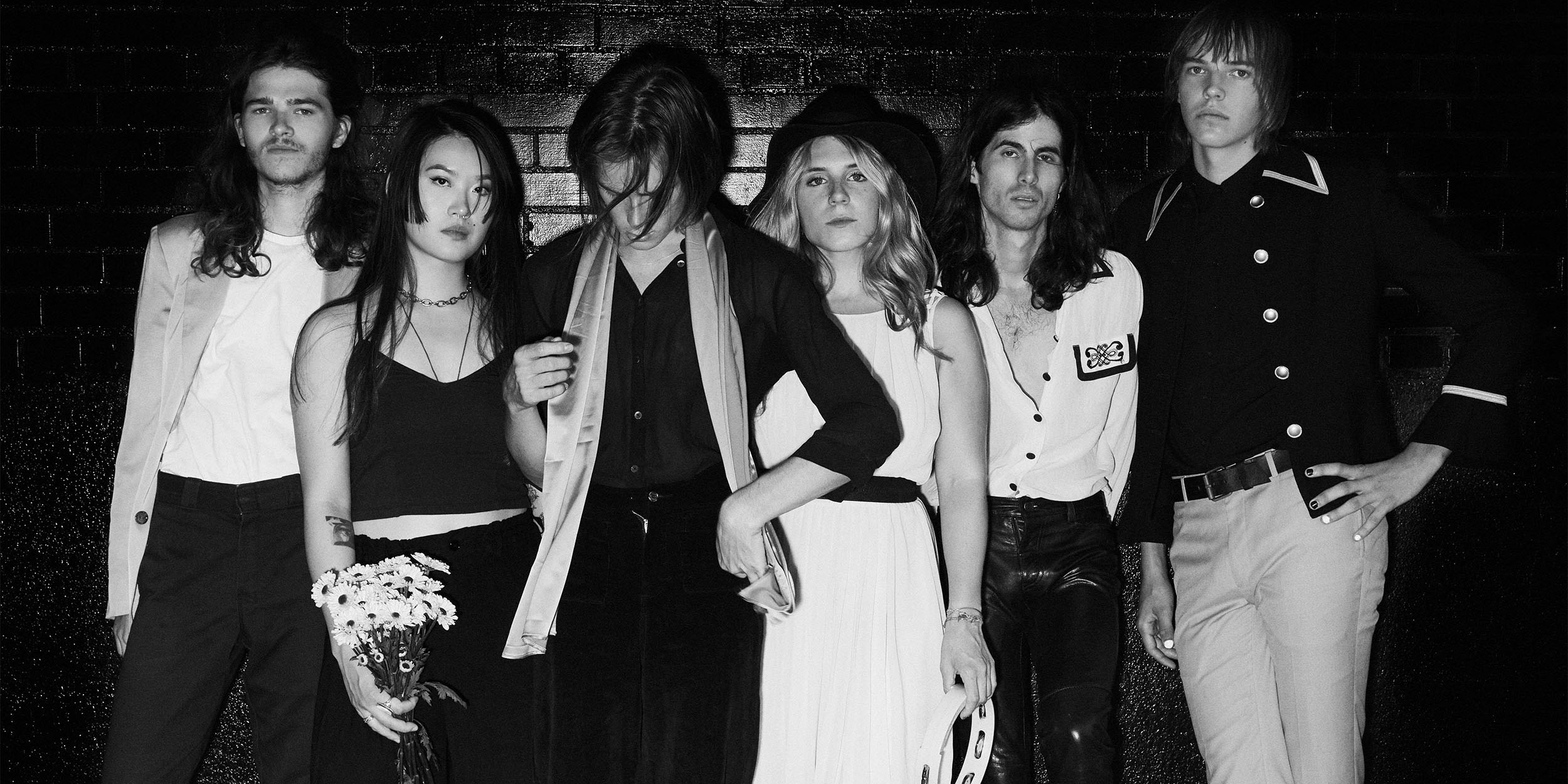 GIRL SKIN released their 11-track debut album back in April called Shade is on the other side. They’ve received praise from the likes of NPR Music who said their “gentle folk songs benefit enormously from their soft chamber-pop bent, which helps an ambitious, sweeping quality to Simon’s softly contemplative lyrics.” While Paste describes the song “Soft Gun” as a “retro pop or folk-rock gem — or even a lost George Harrison song.” Quite a bold but rather accurate statement. Written and recorded by singer-songwriter and frontman Sid Simons – along with contributions from his bandmates Wyatt Mones, Stanley Simons, Ruby Wang, Sophie Cozine, and Noah Boling, GIRL SKIN transports listeners to a teenage room adorned with concert posters, taped half-heartedly to walls. Songs like “Bite Real Hard” take you to a time of a packed venue; the halls echoing with Sid’s smooth vocals and the vibrations of an electric guitar.

The Orchard spoke to GIRL SKIN a month into COVID-19 social distancing measures. Sonically, the album is a combination of a throwback and forward-thinking body of work; the album sings about shade on the other side, meaning the varying emotions – from optimism to confusion – that come with life. GIRL SKIN – a band truly coming into their own – is here to take you through their musical journey — violins, harmonies, goosebumps, and all. Let’s see what they’ve got to say.

Where did GIRL SKIN meet? When did you all start making music? What made the band choose the name GIRL SKIN?

Well, we wanted our band to be named after the most beautiful thing we could think of and GIRL SKIN was the first thing that came to mind. We all met in kind of different circumstances but the short story is we were all playing in different bands in Brooklyn, New York and then slowly came together to form our own group, which became GIRL SKIN.

Your music combines strings, strong harmonies, folk-inspired sounds, and distinct lyrics. In your own words, how would you describe your music? How do you want to stand out?

I don’t think we’re specifically trying to stand out, that’s not really our objective but having said that I do think we’re making music unlike anyone else right now. We like new music just as much as we like old music, and I think you can hear that in our songs and ideas and the way we approach them.

What other artists and songs out there do you look to for inspiration?

That’s always changing for us but right now we’re really into Suede and The Verve. They’ve been on repeat in this household. Also War Violet, who’s a good friend of ours and an amazing singer-songwriter.

It feels great to have it finally out in the world. This record was a long time in the making. The meaning behind the title stems from the songs and the album as a whole, the first few listens through you get a sense of joy, optimism and romanticism but the more you listen to it, around the 4th or 5th time you start feeling other shades, darker more emotional and complex feelings and thoughts.

The group is 6 of you! How do you all work together to incorporate everyone’s opinions and vision for the group?

When it comes to the music itself we all feed off one another. The great thing about having a band with multiple great musicians is you get advice from everyone who knows their instruments a lot better than any one of us could alone. We are all pretty creative and improvisational and like to try different things and find interesting sounds. We all trust each other’s opinions but when it comes to certain things we disagree on we keep listening to it and try stuff until we can agree. There are never large arguments or crazy compromises, if anything the more people help because we get to hear different opinions that only push the music forward.

If you could collaborate with any artist – solo or group – who would it be and why?

That’s a hard one. I really don’t know. Maybe…Mozart, I think that would be an interesting experience.

Did you actually record the full album in a bedroom? How did the freedom of recording anywhere influence the album and your decisions for release?

Yea, we recorded it in my bedroom. It wasn’t a conscious thing. We just didn’t have the luxury of going into a nice big studio. We had to work with what we had.

How have your previous travels influenced the direction of your lyrics and the various incorporated sounds?

Growing up as a kid and moving from place to place and country to country, there’s a lot of different people you come across. Different personalities, different mannerisms, whole different cultures and whole different languages. So lyrically all the songs are based on people. People who are in my life, people who have been in my life, and relationships I’ve had.

I think “The Path” was probably the hardest to write. I don’t want give away too much but it’s about a really close friend of mine and the pain and abuse they were going through. A couple of tears were definitely shed while writing that song. And my favorite song is “Bite Real Hard”. It’s about a family member of mine who kind of showed me the ropes when I was a kid and who I looked up to a lot. I love him dearly.

GIRL SKIN will be Live Streaming this Thursday, August 13 at 7pm EST, on Twitch.TV on Spin Magazine’s channel.

Italian artist and rapper Mondo Marcio released his first album at the age of 17. Within a few months, Mondo’s self-produced album Solo Un Uomo was certified gold and quickly received platinum certification. An icon of the musical genre in Italy, Mondo is ...